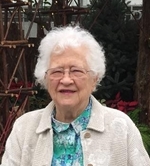 Barbara Jane Jones, 93, formerly of Wild Rose, Wisconsin, passed away Friday, June
12, 2020, in Cincinnati, Ohio. Known to all as Barb, she was a woman of great spirit,
many talents, and a life-long passion for learning. Her character, kindness and
dogged work ethic inspired both her family and all who knew her.

Barb was born December 26, 1926 in Oshkosh, Wisconsin to Levi and Mildred Jones
of Pickett, Wisconsin. She grew up on a dairy farm, a fourth generation descendant
of pioneer Welsh immigrants who farmed in the area known as the Oshkosh Welsh
Settlement. She attended Bethesda Church that had been built by her great-
grandfather William L. Jones, saer (carpenter) in 1856. She became the piano
accompanist for church services when she was 13 years old, much to her dismay as
it necessitated more practicing, and limited her preferred time out of doors. But
practice she did, laying a solid foundation on her way to becoming an accomplished
pianist.

Barb also attended Oak Grove School, a one-room schoolhouse through 8 th grade.
Always an academic standout, she placed first in the academic tests of students in all
rural schools when she was 13. She finished her high school education in Oshkosh
loving and excelling in all subjects, especially math. Despite often being the top
student in her math classes, she was thoroughly disgusted when several boys in her
class were instructed in the use of a slide rule, and she was told that girls didnt need
to know that. Annoyed, but undaunted, she soon headed off to the University of
Wisconsin in Madison to pursue a degree in Nursing, not a degree in music as her
Welsh mother would have preferred.

It was there in Madison that Barb met the love of her life, Edward D. Jones, also a
student at the university. Ed, a decorated WWII US Army Air Corps B-17 pilot, had
returned to UW to complete his undergraduate degree that had been interrupted by
the war. Ed, himself a descendant of Welsh immigrants who farmed, had grown up
on the western side of the state near Sparta. Ed, also a former star basketball player
and a member of the University of Wisconsins 1941 NCAA Championship team,
was very much taken with Miss Jones upon meeting her. He quickly devised a full
court press courting strategy to eliminate any possible competition to make sure
this girl didnt get away. Sound strategy; excellent implementation.

After promising her mother that she would finish her university degree, Ed and Barb
were married on July 19, 1947. Like her mother, Barb also married a Jones, creating
endless comments of No, your mothers maiden name was her last name before she
was married. Barb completed her 5-year nursing program with both a BS and an
RN. Devoted to each other, Ed and Barb shared a long and happy life and had been
married for 66 years when he passed away in 2014.

Ed completed his PhD at the University of Wisconsin and in 1958 accepted a faculty
position in Plant Pathology at Cornell University. Ed and Barb moved their young
family of four children to Ithaca, New York where the children were raised. While
the children were growing up, Barb wore many hats hockey and baseball mom,
4-H leader, Meals on Wheels, Sunday School teacher and pianist, financial investor,
music mentor, sewing teacher, academic tutor, cheerleader, Mother Bear, and of
course on-call nurse. She was once quoted as saying that she thought one of her life
accomplishments was raising four children to be successful adults.

Barb later joined Ed to work as a research associate at the Uihlein Farm of Cornell
University to assist in the advancement of growing disease-free potatoes by tissue
culture. With her background in science and skilled hand-eye coordination
developed as a musician, Barb became particularly adept at eradicating viruses by
excising the meristems from sprouts and first demonstrated the feasibility of
successfully using this procedure in 1976. She was recognized by the New York
State Potato Growers Association for her contribution to the industry.

Following their retirement, they moved to Big Hills Lake, near Wild Rose, Wisconsin.
They became active members of the Redgranite First Congregational Church where
they established the annual Gymnfa Ganu, Welsh Hymn Festival.

They later moved to North Oaks, Minnesota to be near their daughter Jacalyn and
after Eds passing, Barb moved to Cincinnati, Ohio to be near their son Doug.
Surviving are her children, Dr. David (Julie) Jones, Kathleen (Bill) Smullen, Jacalyn
Jones, and E. Douglas (Tracy) Jones, her sister Sandra (John) Stanicek, thirteen
grandchildren, eight great-grandchildren, as well as numerous nieces and nephews
and their families.

Private services will be held on June 20, 2020 at Bethesda Presbyterian Church in
Ring, Wisconsin and burial will take place in Woodlawn Cemetery in Sparta,
Wisconsin.

The family wishes to extend many thanks to the caring community at Anthology of
Anderson Township in Cincinnati, Ohio.

In lieu of flowers, memorial donations in the memory of Barbara Jones may be made
to Bethesda Presbyterian Church/Bethesda Cemetery Association, PO Box 303
Pickett, WI 54964, or the charity of your choice.