To share your memory on the wall of Dwight Edward Witschger, sign in using one of the following options:

He was preceded in death by his wife Carlyn (Kit), brother Joseph, and sisters Margaret and Elaine. He is survived by his sister Barbara, daughters Theresa White, Dar... Read More
Dwight E. Witschger, age 82, died Friday, September 11th at his home.

He was preceded in death by his wife Carlyn (Kit), brother Joseph, and sisters Margaret and Elaine. He is survived by his sister Barbara, daughters Theresa White, Darlene (Larry) Barker, and Denise Tyoe, grandchildren Tanya, Stephanie, Hope and Owen, great grandchildren Tyler, Ashley, Logan, Cody, Elise and Gabriel as well as numerous nieces and nephews.

Dwight served 23 years in the United States Marine Corps attaining the rank of GySgt. He was a veteran of the Vietnam War where he served two tours. During his career, he earned numerous medals and commendations including the Gallantry Cross, National Defense medal and Good Conduct medal. The discipline and patriotism he learned in the Marine Corps never left him, as friends and family will attest. "Once a Marine, always a Marine", '"Oorah!"

After retiring from the Marine Corps, Dwight was a bartender at Coldstream Country Club for 20 years. He also worked as a Deputy Sheriff of Funeral Escort for T. P. White & Sons Funeral Home.
Some of his most rewarding work came from the many years of volunteer services that he and Kit performed with the Shriners Hospital for Children. Dad was a 32nd degree Mason, member of Yeatman Lodge #162 F&AM, and Scottish Rite.

In lieu of flowers, please send donations to Shriners Hospital for Children.

Receive notifications about information and event scheduling for Dwight Edward

We encourage you to share your most beloved memories of Dwight Edward here, so that the family and other loved ones can always see it. You can upload cherished photographs, or share your favorite stories, and can even comment on those shared by others.

Posted Sep 15, 2020 at 08:28pm
With deepest sympathy, our friendship with Dwight goes back many many years . He will always remain in our hearts. 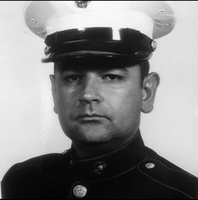