To share your memory on the wall of Fahid \"Frank\" Daoud, sign in using one of the following options:

Frank was one of seven children and he lived with his family in Fuheis, Jordan during Dauod's childhood. In 1951, one of Dauod's uncles emigrated to the United States... Read More
Fahid "Frank" Dauod, of Anderson Twp died March 17, 2020, 83yrs old.

Frank was one of seven children and he lived with his family in Fuheis, Jordan during Dauod's childhood. In 1951, one of Dauod's uncles emigrated to the United States and reported to the family that be had found opportunity in America. Two of Dauod's brothers joined the uncle and in 1957, Dauod decided to join them as well. He saved up enough money over the years to attend Chase College, where he earned a business degree in 1963. That same year, Dauod and his three brothers learned about an opportunity to buy Hamburger Heaven, a restaurant in Mt. Washington. The brothers used their savings to put a $1,200 downpayment on the business and real estate. Dauod returned to Jordan for a period of time to work as a banker while his brothers continued to operate the business in Mt. Washington.

In 1965, the brothers decided to switch the business' focus from hamburgers to chili, and they renamed the business Gold Star Chili. Dauod returned to the United States in 1969 to get involved with the business and be with his brothers again. Gold Star Chili quickly took off and began expanding rapidly throughout the 1970s. Many restaurants were built across the region. If a person who wanted to open a Gold Star Chili restaurant but did not have capital or experience, Dauod would help them.

Dauod retired from the daily operations of Gold Star Chili in 1989 but remained busy in the Greater Cincinnati community. He co-founded St. James Eastern Orthodox Church in Loveland, Ohio. Dauod and his wife, Laila, raised their children in Anderson Township. Dauod became a grandfather to 11 grandchildren.

Frank's life was one of ambition, courage, determination and pure grit. It was also a life of loyalty, love, never-ending generosity and an earnest hospitality of the purest and most genuine form.

Dauod's memorial service will be kept to immediate family due to the COVID-19 pandemic. A celebration of his life for extended family and friends will be held on a future date.

Instead of flowers, Dauod's family is asking for any donations to be made to the St. James Orthodox Church in Loveland.
Read Less

Receive notifications about information and event scheduling for Fahid "Frank"

We encourage you to share your most beloved memories of Fahid "Frank" here, so that the family and other loved ones can always see it. You can upload cherished photographs, or share your favorite stories, and can even comment on those shared by others. 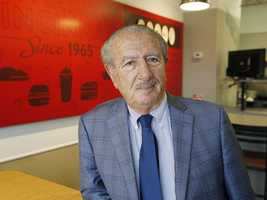