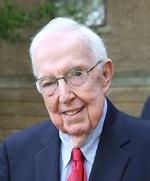 John Doyle Cosgrove, 97, passed away peacefully on Sunday, January 31, 2021 surrounded by his loving family. A native of Davenport, Iowa, John was a World War II Navy veteran who served in the Pacific theater. When the war ended, he graduated from St. Ambrose University in Davenport and married Mona Greenwood of Farley, IA. In 1962, John and Mona relocated to Cincinnati, OH where they raised their six children. They were married for 65 years. In 2014 John relocated to The Seasons in Kenwood, OH, where he is remembered for his jokes and lively sense of humor. He was a member of the Seasons Slammers chair volleyball team and often joked he was at The Seasons on a chair volleyball scholarship. He was proud of his Iowa heritage, especially his home town of Davenport, IA.

John was preceded in death by his parents Jack and Kathleen, his brothers Jim and Tom, and his wife, Mona. He is survived by his dear sister Sheila Kautz (Barry) and his six children: Anne Clarke (Tim Hansley); Mary Buelow; Nancy Cody; Jack Cosgrove; Joe Cosgrove ; and Julie Kammerer (Doug). He is also survived by grandchildren Thomas Clarke (Leslie); Amy Stieg (Tyler); Jeff Buelow (Pei); Matt Buelow (Charlotte); Brian Buelow; Ben Buelow (Lia); Phillip Cody; Will Kammerer; Sgt. Joseph Kammerer; and Ellen Kammerer, as well as many nieces and nephews. Great-grandchildren include Sean, Natalie, Aidan, Emma and Jack Clarke; Riley and Madeline Stieg; Maddie Buelow; and Ian Buelow. Private Mass of Christian Burial will be held at Guardian Angels Church, 6539 Beechmont Avenue, (Mt. Washington) Cincinnati OH with burial to follow in Guardian Angels Cemetery. In lieu of flowers, donations may be made in Johns memory to Down Syndrome Association of Greater Cincinnati, 4623 Wesley Avenue, Suite A, Cincinnati, OH 45212. The Mass will be livestreamed at https://www.youtube.com/watch?v=9_T94SUV8HI on Friday at 10:30 AM.