To share your memory on the wall of Marianne Myers, sign in using one of the following options:

Provide comfort for the family of Marianne Myers with a meaningful gesture of sympathy.

We encourage you to share your most beloved memories of Marianne here, so that the family and other loved ones can always see it. You can upload cherished photographs, or share your favorite stories, and can even comment on those shared by others.

Posted Dec 29, 2019 at 12:38am
Sending prayers to all. Thank you for being a wonderful friend to my mother for many many years. Posted Dec 10, 2019 at 09:03pm
In loving memory of the Funny Farm Mom Our deepest sympathies, Rod and Kim Kelsay

Flowers were purchased and a memorial tree planted for the family of Marianne Myers. Send Flowers

Posted Dec 09, 2019 at 09:20pm
I’ve known Bill and Marianne for all their married life. Absolute soulmates. It was just five years ago on December 1 that I lost my soulmate of 52 years. May your many fond memories help you through this very trying time. I’m praying for you and your family. God bless.
Comment Share
Share via:
IG

Posted Dec 09, 2019 at 05:46pm
Dear Patricia and your family,, pease Lord help you in these very sad day.Your Mom is always with you loving you and watching you from heaven. 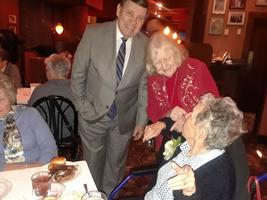