To share your memory on the wall of Patricia \"Patty\" Haase Davis, sign in using one of the following options:

Patty graduated from Withrow HS in 1945 where she:
Danced in Pony Chorus and was part of the modern dance club
Served on Senior Council
Played varsity field hockey, basketball, and softball.
Was first a mascot in the marching band at Withrow junior high school before becoming
Smitty’s high-stepping drum majorette and drum major at Withrow High School --
The first girl drum major in Cincinnati.
Was presented the Withrow Honor Girl ring, which was given to the
all-around outstanding female graduate of 1945.
Was elected Sweetheart of Demolay for the city of Cincinnati.

She graduated from the University of Cincinnati Teachers College in 1949 where she:
Played varsity field hockey and basketball.
Was president of the Women’s Athletic Association.
Was drum majorette and elected band sponsor of the marching band.
Was tapped for Mortar Board for all around leadership and participation.
Was presented the UC senior class ring (The “C Ring”) for the outstanding female graduate.

She married Leland Davis on August 26, 1950. Leland and Patty moved to Evanston, Ill where
Leland was awarded a graduate scholarship at Northwestern University and Patty taught
modern dancing at Evanston High School. They went on to live in many parts of the country as
they built their family and professional life together – including Louisville, KY, Philadelphia, and
Los Angeles. Upon their return to Cincinnati, Patty was a physical education teacher at her
alma mater, Withrow Junior High School.

She was devoted to Mt. Washington Church where she served as an Elder, Trustee, church
school teacher, and Stephen Minister. She will continue to be loved beyond words by her
children and family.

In lieu of flowers the family requests donations to Mt. Washington Presbyterian Church and
Hospice of Cincinnati. .

We encourage you to share your most beloved memories of Patricia "Patty" Haase here, so that the family and other loved ones can always see it. You can upload cherished photographs, or share your favorite stories, and can even comment on those shared by others.

Posted Feb 28, 2020 at 07:44pm
Patty was so dear to me, and I loved her as a second mom. I worked for Patty for almost 20 years. We would laugh and act crazy all the time.If she was kidding with me I'd say "Leland Patty is being mean to me." He'd say "Patty be nice" haha!
She could always tell if something was wrong in my life. She would say I know something is wrong, and you don't have to share with me if you don't want to! I always did, and felt better for it.
Patty and Leland helped me through my mother's death.
I could write a book, but I really did love her, Leland also!!
I know she is up in Heaven with Leland with that big smile on her face, and dancing! That's what I told Shelly, that thinking of them dancing is what helped me through this.
God Bless the family!
Rest in Peace sweet Patty.
I love you,
Cathy
Comment Share
Share via:
ED

Posted Feb 27, 2020 at 10:18am
Aunt Patty most certainly left a lasting impression on anyone who had the great pleasure of meeting her. Patty had a remarkable way of making one feel welcomed and part of her inner circle with no hesitation. "Brighten the corner where you are" is no exaggeration. In fact, it was just the beginning with Aunt Patty -- she brightened places far beyond her corner.
Comment Share
Share via:
LH

Posted Feb 27, 2020 at 09:54am
Sending all of our love and hugs to the Davis family as you celebrate Patty's and beautiful life.

Posted Feb 26, 2020 at 04:20pm
Dear Davis Family: Our deepest sympathies and prayers to you and your family. We loved Patty Love to you all. 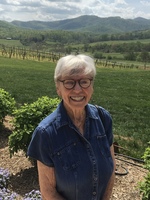