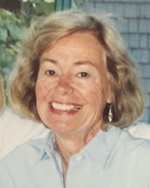 Virginia "Ginny" Lee Cole (nee Applegate) of the Village of Mariemont died on Monday, June 29, 2020 at the age of 93. She was born on May 24, 1927 in her family's home on Garland Ave. in Oakley. Her father, Jesse Applegate, was a railroad brakeman. Her mother, Lavina Applegate (nee Clark), ran the household.

She spent most of her childhood through the Great Depression living on a small family farm in Mt. Carmel. As a teenager, she lived on Drake Avenue in Newtown and graduated from Terrace Park High School in 1945. She married naval aviator, Captain Thomas Eugene Cole in 1947 and they welcomed their daughter, Kimberly Ann Cole, into the world the following year.

Their family pursued Gene's career in industrial engineering, which moved them to several new cities. Ginny's role was managing all of the household duties related to moving and establishing their life in a new place. All of this experience culminated in what was perhaps her greatest achievement, serving as General Contractor for the design and construction of her own house, a cottage in Tallahassee in the early 1990s. She oversaw each element of the process and could speak to the technical details of building materials, systems, and finishes. Ginny made her final move back to Cincinnati in 2017 after nearly 30 years living in Tallahassee, Apalachicola, and then The Villages, Florida.

Ginny collected Early American, Colonial, and Shaker furniture. She had a deep admiration and respect for talented craftspeople who can construct precision pieces by hand. She loved dancing and golf and kept an immaculate house. She also loved Memorial Day parades and decorating her house in red, white, and blue for the 4th of July. She had her way of doing things and was rarely, if ever, convinced otherwise. She was the last of her generation in our family and we will miss her dearly.

She was preceded in death by her parents, four older sisters and a younger brother, her husband, Thomas Eugene Cole, and her daughter, Kimberly Ann Cole. She is survived by her grandson Lyte Cole, his daughter Paige Cole (with Natasha Underwood), her granddaughter Faith Cole (Travis) Hall, their children Eugene Hall and Kimberly Hall, as well as loving nephews and nieces.

In lieu of flowers, memorials may be directed to Hospice of Cincinnati.

A Private graveside service was held at Gate of Heaven Cemetery.